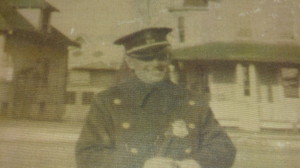 Patrolman Duer was struck and killed by a drunk driver while working a special detail with the New Jersey State Police. He had made a traffic stop of a vehicle whose lights were too bright. As he examined the driver’s license he was struck by a vehicle traveling on the wrong side of the roadway. The driver of the vehicle was arrested and charged with DUI and manslaughter. He was convicted and sentenced to 30 days in jail and received a $100.00 fine.